Interested in cooking classes? Go to our Cooking Classes and Workshops Page for a full listing of upcoming workshops and classes at the Center!

Upcoming Workshops and Events at the Center: 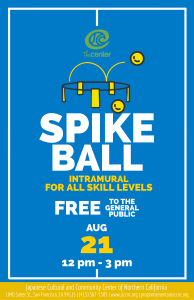 Join us at the Center on August 21st for Spikeball!

Spikeball is a team sport played by two teams of two players. The object of the game is to bounce the ball off of the net in a way so that the opposing team cannot return it. A team is allowed up to three touches to return the ball. The rally continues until the ball is not returned properly.

You'll have an opportunity to get to learn the sport and play the game, and you'll only need to bring your hands and feet. Whether you're totally new, a rookie, or a seasoned spikeball veteran, we hope you'll join us for a day at the Center to make some new friends and hopefully discover your new favorite sport. 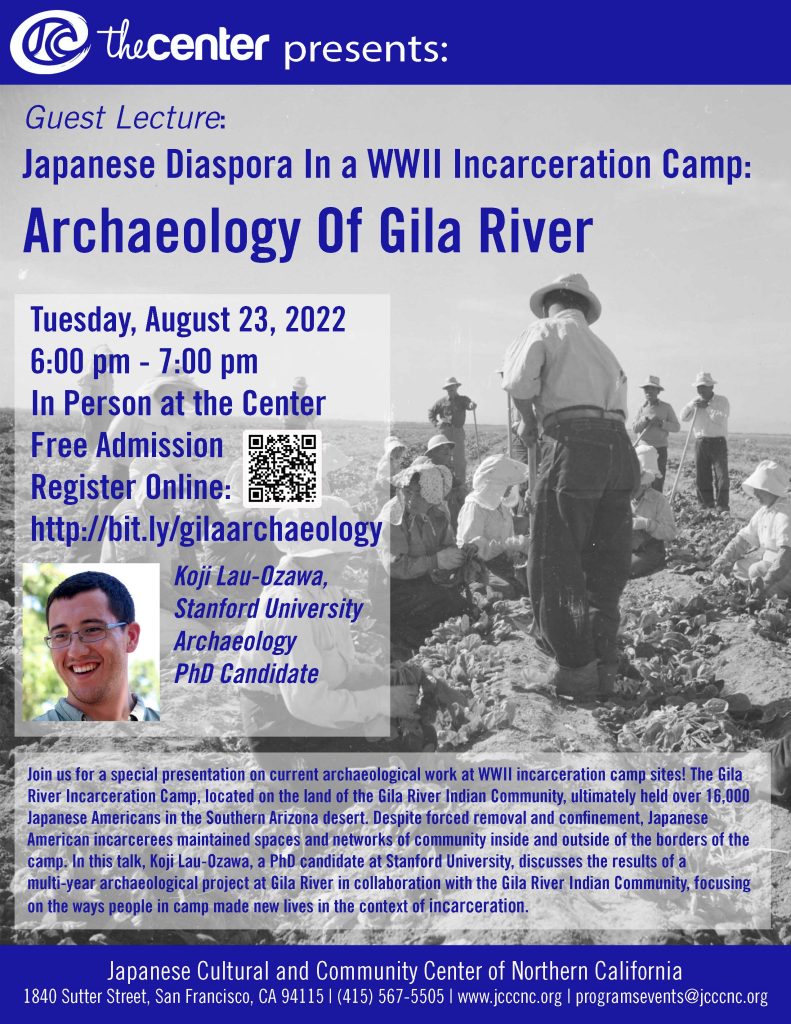 The Gila River Incarceration Camp, located on the land of the Gila River Indian Community, ultimately held over 16,000 Japanese Americans in the Southern Arizona desert. Despite forced removal and confinement, Japanese American incarcerees maintained spaces and networks of community inside and outside of the borders of the camp. In this talk, Koji Lau-Ozawa, a PhD candidate at Stanford University, discusses the results of a multi-year archaeological project at Gila River in collaboration with the Gila River Indian Community, focusing on the ways people in camp made new lives in the context of incarceration. The research has been especially personal to Lau-Ozawa as Gila River was the site of his grandparents’ incarceration. 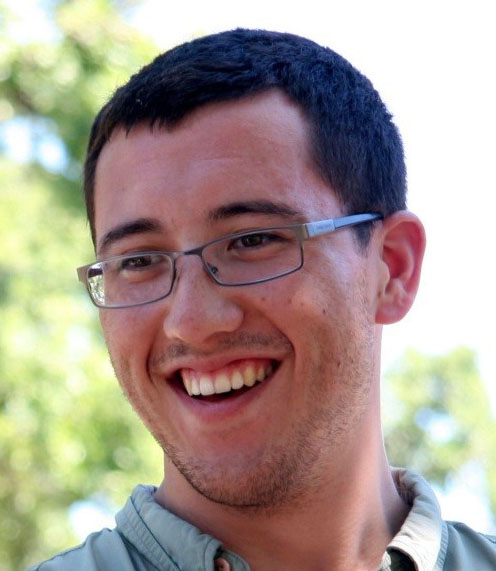 Koji Lau-Ozawa is a Ph.D. candidate at Stanford University’s Department of Archaeology. He received his M.A. with Honors in Archaeology and Social Anthropology from the University of Edinburgh, where he wrote his thesis on “The Use of Archaeology in the Formation of Ethnic Identity for the Ainu” (indigenous people of Japan), and an M.A. from San Francisco State University Department of Anthropology with thesis work on “The Archaeology of Gardens in Japanese American Incarceration Camps. He regularly comes to the Center as a member of the San Francisco Kendo Dojo. 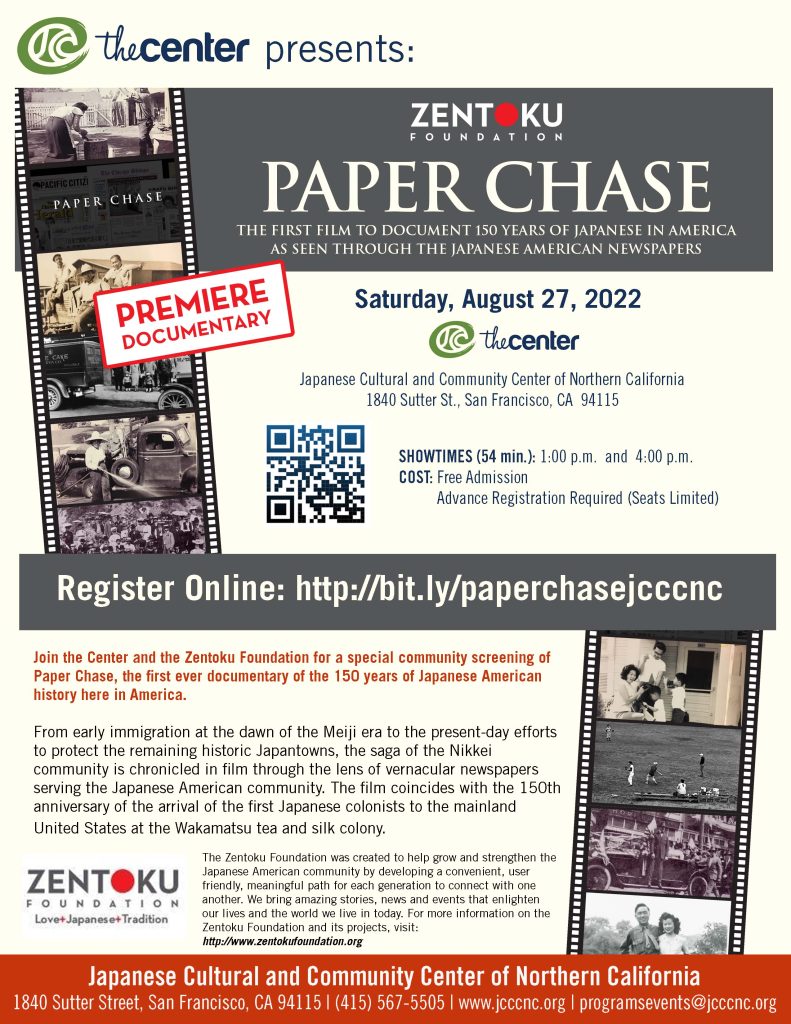 From early immigration at the dawn of the Meiji era to the present-day efforts to protect the remaining historic Japantowns, the saga of the Nikkei community is chronicled in film through the lens of vernacular newspapers serving the Japanese American community. The film is timely, coming after the recent 150th anniversary of the arrival of the first Japanese colonists to the mainland United States at the Wakamatsu tea and silk colony. Join the Center and the Zentoku Foundation for a special community screening of Paper Chase, the first ever documentary of the 150 years of Japanese American history here in America! 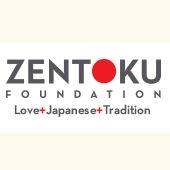 The Zentoku Foundation was created to help grow and strengthen the Japanese American community by developing a convenient, user-friendly, meaningful path for each generation to connect with one another. We bring amazing stories, news, and events that enlighten our lives and the world we live in today. For more information on the Zentoku Foundation and its projects, please visit www.zentokufoundation.org 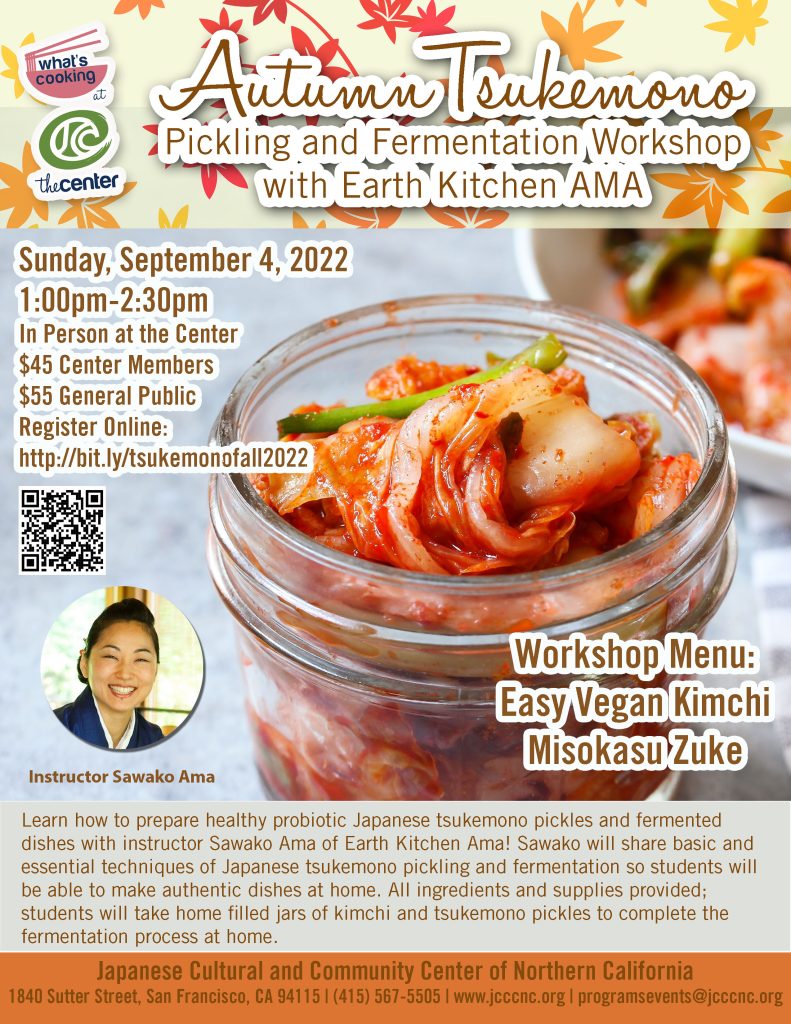 Learn how to prepare healthy probiotic Japanese tsukemono pickles and fermented dishes with instructor Sawako Ama of Earth Kitchen Ama! Pickling and fermentation are great culinary techniques to not only preserve and enjoy healthy vegetables, and just about every Japanese home meal includes some tsukemono as a side, garnish or palate cleanser. Sawako will share basic and essential techniques of Japanese tsukemono pickling and fermentation so students will be able to make authentic dishes at home. This class will be taught mainly in English and with some Japanese. Students will learn basic Japanese cooking terms and common practices behind each dish. All ingredients and supplies provided; students will take home filled jars of kimchi and tsukemono pickles to complete the fermentation process at home.

Sawako Ama is a culinary instructor, integrative body therapist and performing artist based in the Sacramento area. Sawako was born and raised in a Buddhist temple in Kagoshima, Japan, the region of Japan where tonkotsu ramen was made famous. Sawako has taught Japanese and Asian cuisine at the Sacramento Natural Foods Co-op for over seven years at Temple KUKURI, Holistic Living Sanctuary & Japanese Tea and Meditation Center over four years, and produces instructional cooking videos and digital content on holistic Japanese cooking through her YouTube channel Earth Kitchen AMA.

For more information on Sawako, visit her websites: 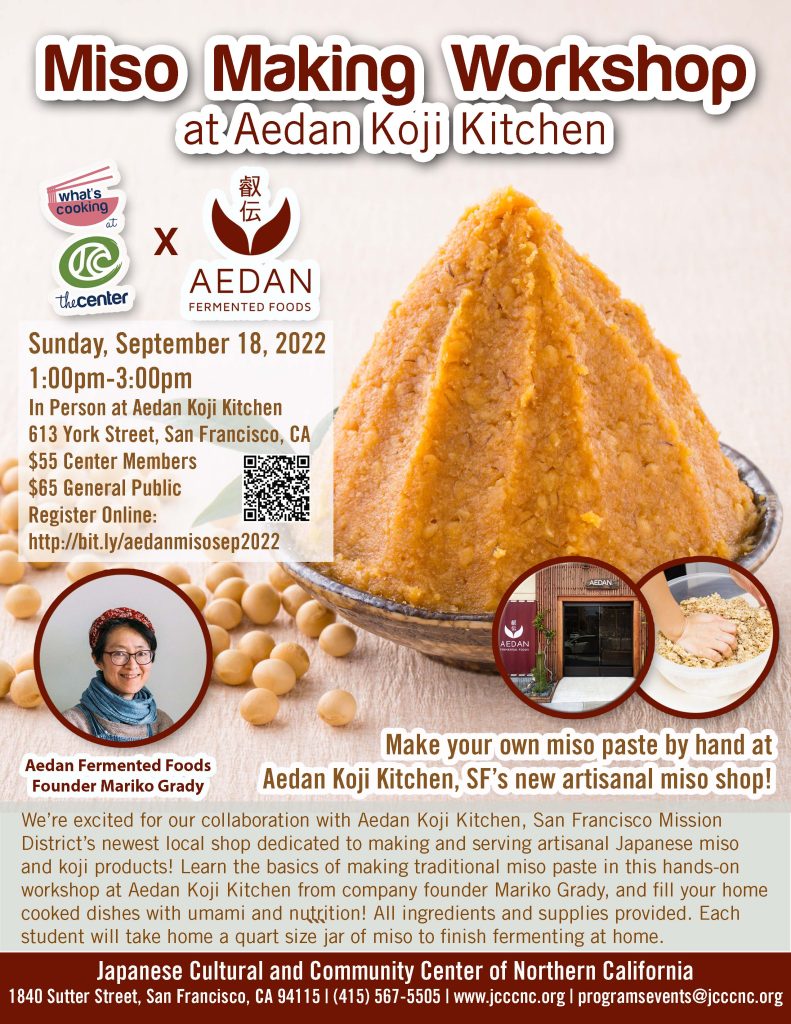 Make your own artisanal miso paste by hand at Aedan Koji Kitchen!

The workshop includes a tasting of Aedan’s miso products and discussion of traditional Japanese foods fermented with koji, including miso, amazake, pickles and more! Then we will get HANDS-ON and mash together our own batch of miso from freshly cooked soy beans, koji and salt. Each student will take home a quart size jar of miso to ferment at home for a minimum of 6 months.

Mariko Grady is the founder of Aedan Fermented Foods. Mariko grew up in Mie, a prefecture in Japan’s Kansai region, known for its many rice fields. As a young woman, Mariko fell in love with performing and traveled the world as an accomplished actor, dancer and singer for thirty-plus years with the Japanese theatre group Pappa Tarahumara. While on tour, she always carried miso as a way to stay healthy. Her theatrical travels eventually brought her to San Francisco, where she met her husband after a performance and decided to settle down in San Francisco. Traditional cooking and miso became a way to share Japanese culture with her family and friends.

In 2011 after the devastating tsunami struck Japan, Mariko sold her natural fermented products to friends to fundraise for Japanese victims. The popularity of Mariko’s delicious fermented foods spread quickly by word-of-mouth in the local community between Japanese mothers and their friends. After this fundraising, Mariko started to write Aedan’s weekly newsletters to share fermented foods and her wisdom on leading a happy healthy life. In May 2012, Mariko joined the incubator kitchen program at La Cocina in San Francisco and since then has worked to develop her Aedan fermented food product line.

The name Aedan ‘叡伝’ comes from two Kanji characters: ‘叡’ means wisdom and ‘伝’ means to "hand down" from generation to generation. Aedan creates small batch fermented products using the knowledge passed down from Mariko's Grandfather’s miso-making business and mother’s home miso recipes in Japan. Using this traditional knowledge, she has adjusted and perfected her recipes to match the unique flora and environment of San Francisco. 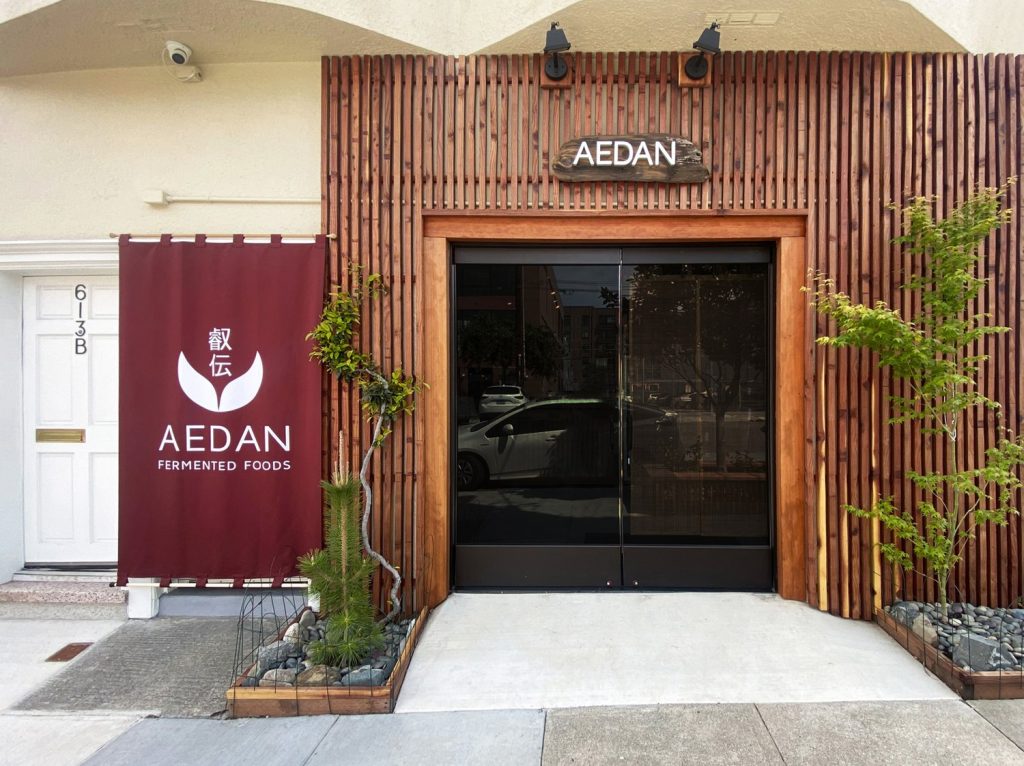 Aedan brings Japanese fermented foods that are essential to flavor and health of every traditional Japanese meal to your table. Aedan hand crafts these foods in small batches, bringing you the foundation you need to craft fresh, healthful meals for you and your family. For more information on Aedan Koji Kitchen and their Fermented Foods and products, visit: aedansf.com. 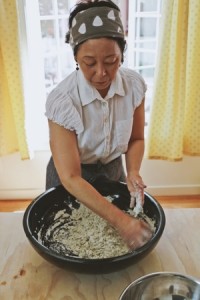 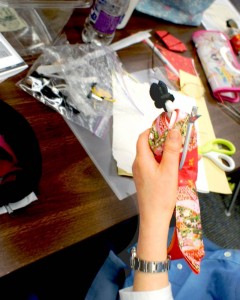