View recordings of our past virtual programs and events on this page! 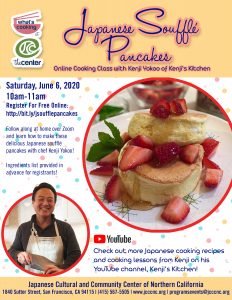 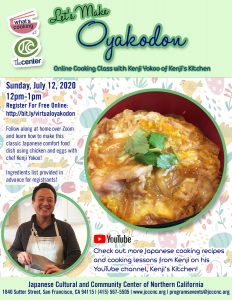 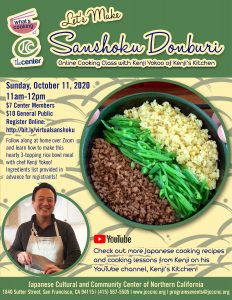 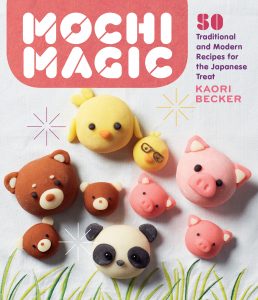 For more information on Mochi Magic and Kaori Becker, go to www.kaoriskitchen.com 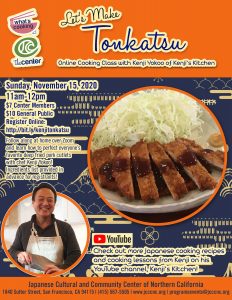 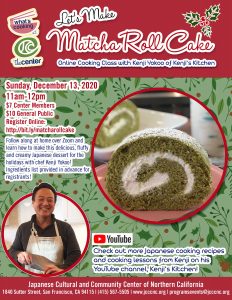 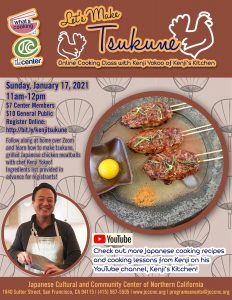 Seize, Brian Komei Dempster’s book of poetry following up on his book, Topaz, spares no one the highs and lows of fatherhood. The speaker struggles to care for his young and ailing child—a child whose many medical problems create an obstacle course of moral and emotional dilemmas. These poems also link his son’s physical and verbal seizure to the wartime story of his mother – just an infant when she and her family were forcibly removed from their church home in San Francisco’s Japantown and imprisoned in the Topaz WWII Japanese American incarceration camp. Other themes the book explores include mixed race identity, racial violence and PTSD of war veterans.

About Brian Komei Dempster: Brian Komei Dempster’s debut book of poems, Topaz (Four Way Books, 2013), received the 15 Bytes 2014 Book Award in Poetry. Seize, his second collection of poetry, was published by Four Way Books in fall 2020. Dempster is also the Editor of Making Home from War: Stories of Japanese American Exile and Resettlement (Heyday, 2011) and From Our Side of the Fence: Growing Up in America’s Concentration Camps (Kearny Street Workshop, 2001), which received a 2007 Nisei Voices Award from the National Japanese American Historical Society. He is a professor of rhetoric and language at the University of San Francisco, where he serves as the Director of Administration for the Master of Arts in Asia Pacific Studies program and a former instructor of our Senior Writing class.

For more on Brian Dempster, go to: briankomeidempster.com

Author Talk - We Are Not Free by Traci Chee Co-Hosted by Writer Misa Sugiura, 9-1-20

Book presentation and author talk with Traci Chee for her historical fiction young adult novel, We Are Not Free, co-hosted by writer Misa Sugiura. Recorded by the Japanese Cultural and Community Center of Northern California on September 1, 2020.

For more information on We Are Not Free and Traci Chee, go to: www.tracichee.com 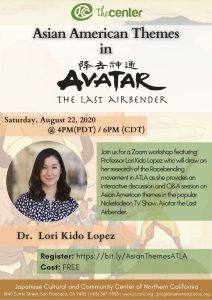 Webinar featuring Dr. Lori Kido Lopez drawing on her research of the Racebending movement in the hit Nickelodeon animated TV show Avatar: The Last Airbender, as well as her background in Asian American studies and Media and Cultural studies to facilitate an interactive discussion and Q & A on Asian American identity, representation, and themes in ATLA. Originally recorded by the Japanese Cultural and Community Center of Northern California on August 22, 2020.

Dr. Lori Kido Lopez is an Associate Professor of Media and Cultural Studies in the Communication Arts Department at the University of Wisconsin-Madison. She is the author of Asian American Media Activism: Fighting for Cultural Citizenship and the editor of Race and Media: Critical Approaches. She is mixed race Japanese American and originally from Portland, OR. 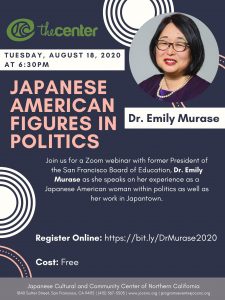 About Dr. Emily Murase: Dr. Emily Murase is a prominent figure and leader within San Francisco and the Japanese American community. As former School Board President, twice elected, she supervised the budget of $890 million in public education for 57,000 students in 136 schools served by 10,000 district employees. Within her work, she drove anti-bullying efforts and championed world languages.

Previously, she led the San Francisco Department on the Status of Women for over 15 years, managing a budget of $10 million, a pioneer in her profession. Dr. Murase has also served in the first Clinton White House as Director for International Economic Affairs (1993-1994), the Federal Communications Commission, and AT&T Japan in Tokyo.

Dr. Murase has served on the Japanese American Citizens League (San Francisco, Tokyo, Washington D.C. Chapters) and is currently on the boards of Democratic Women in Action and the San Francisco-Osaka Sister City Association.

Webinar - Helping Family and Friends Cope with the Stress of COVID-19 with Dr Kayoko Yokoyama, 8-11-20

Webinar on helping family members and friends cope with the stress of COVID-19 with psychologist Dr. Kayoko Yokoyama. The 2nd of 2 webinars focusing on mental health in the Japanese American community during the COVID-19 pandemic. Recorded by the Japanese Cultural and Community Center of Northern California (JCCCNC/the Center) on August 11, 2020.

Kayoko Yokoyama, Ph.D. is licensed psychologist in private practice serving a wide spectrum of individuals including women, immigrants, and people of color through a strength and evidence-based approach with consideration of sociopolitical dynamics, systemic oppression, and collective trauma.

She is a former Professor of Clinical Psychology at JFK University and after 16 years in that role, she now serves as Adjunct Faculty at JFK University (Pleasant Hill, CA) and The Wright Institute (Berkeley, CA). She enjoys mentoring and teaching her students and her areas of interest include feminist therapy, social justice training, and women’s issues including body image and mothering. She has also served for five years as the Director of SunVision Workshops, a cultural and educational program for elder care professionals from Japan to learn about the psychosocial care of older adults in the U.S.

She was born in Tokyo, Japan and brings her bicultural, international, and feminist perspectives to her teaching, mentoring, clinical work, and advocacy.

Author Talk - A Question of Loyalty by Mike Malaghan, 8-9-20

Author Talk and Q&A with Mike Malaghan, author of A Question of Loyalty, the second historical fiction novel in the Picture Bride trilogy. A Question of Loyalty is set among the Japanese American soldiers in the renowned 100th MIS and 442nd RCT fighting units during WWII. Recorded on Sunday, August 9, 2020 by the Japanese American Cultural and Community Center of Northern California (the Center).

For more information on A Question of Loyalty and Mike Malaghan, go to: https://mikemalaghan.com

Webinar - Resilience: As the Bamboo Bends - Coping with the Stress of COVID 19 with Dr Satsuki Ina, 7-21-20

Webinar presented by the Japanese Cultural and Community Center of Northern California (JCCCNC/the Center) featuring Dr. Satsuki Ina discussing how to cope with the stresses of COVID-19. Dr. Ina provides an interactive discussion and Q & A, drawing on Japanese American values and perspectives to understand and bring our best to successfully cope with restrictions imposed on all of us as a result of the COVID-19 pandemic. Webinar recorded on Tuesday, July 21, 2020.

About Dr. Satsuki Ina:
Satsuki Ina, PhD was “born doing time” at Tule Lake—she’s gone on to become an award-winning filmmaker, author, activist, and psychotherapist who specializes in collective trauma. Dr. Ina is Professor Emeritus in the Dept. of Education, California State University. She currently has a psychotherapy private practice in the San Francisco Bay Area specializing in Collective Trauma. She is co-founder and organizer of Tsuru for Solidarity, a direct action, grassroots organization of Japanese American social justice advocates and allies protesting the current incarceration of innocent families seeking asylum at the border. Her upcoming book, Be Strong, Don’t Cry: Love and Resistance in an American Concentration Camp will be published by Heyday Press, Berkeley in 2021. 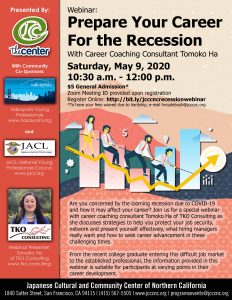 Session 2 of the Japanese Cultural and Community Center of Northern California's "Your Family, Your History" Japanese American genealogy webinar series with genealogist Linda Harms Okazaki, held on Wednesday, May 28, 2020. 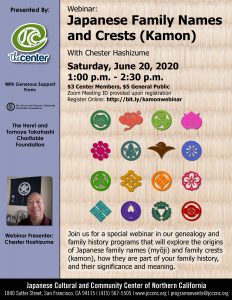