Author Talk: A Question of Loyalty by Mike Malaghan

Author Talk: A Question of Loyalty by Mike Malaghan 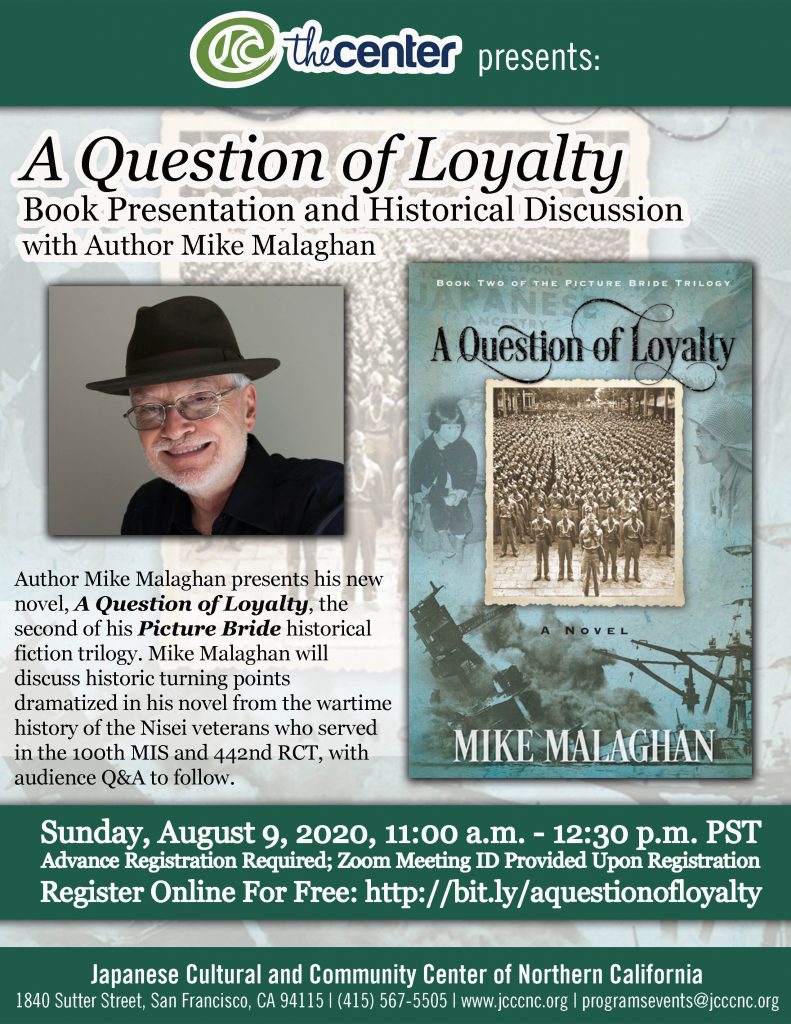 Please join us for a special presentation by author Michael Malaghan as he discusses his new book release, A Question of Loyalty, the second book of his Picture Bride trilogy of historical fiction novels. In A Question of Loyalty, Malaghan dramatizes the Nisei struggle to prove their loyalty to a country wary of their presence. The novel features the early heroic days of the 100th/442nd and life in the American concentration camps. In his presentation, Mike will discuss five inflection points in the history of the war and the Nisei soldiers that were pivotal in the outcomes portrayed in the novel, including:

1. How a 17 year old Japanese-American au pair and a Chinese man shaped Hawaii’s successful resistance to FDR’s order “Remove the Japanese from Oahu.”
2. How the response to humiliation of the second generation Nisei’s being kicked out of the Hawaiian Territorial Guard January 1942 gave rise to the 442nd.
3. What ended the Kotonk – Buddhahead Camp Shelby fighting that saved the 442nd “experiment.”
4. How the 100th proved Clark right; IKE wrong.
5. How General Dahlquist’s questionable order to save the “Lost Texas Battalion” made the 442nd famous & respected.

Book description from Amazon.com:
Courage Under Fire: A saga of bravery, on the battlefield and on the home front in wartime Hawaii

A Question of Loyalty celebrates the “no retreat” Japanese Americans who fought the war on two fronts from the heroics of the famed 100th Battalion on the battlefields of Italy to the bitter struggle against dishonor and humiliation at home. In this blockbuster sequel to his best-selling novel Picture Bride, Mike Malaghan continues the story of Haru Takayama, the proud Japanese immigrant who makes Hawaii her home and raises her children as loyal Americans. But Haru’s world changes forever when Japan attacks Pearl Harbor, her husband is arrested and a son is discharged from his ROTC unit simply for wearing the face of the enemy, and two other children find themselves trapped in Japan.

The lights flickered on at the Hawaii Theater’s premier showing the documentary, “The First Battle,” revealing why most Japanese in Hawaii were not interned in WWII. An Eureka moment.  Only two weeks earlier, I had decided to write an historical novel.  While I spent a lifetime in the corporate world on four continents, in my heart I always thought of myself as a writer.  Married to a Tochigi “new Issei” and living in Hawaii, I knew the story of the Nisei Territorial Guard, who were stripped of their uniforms weeks after Pearl Harbor only to enlist a year later when allowed, was the stuff of a good story.

BUT, these American-Japanese warriors did not just drop out of the sky on December 7th, 1941.  So instead of a single book, a trilogy developed. Picture Bride celebrated the mothers and fathers who left an improvised country to come to America. The sequel, “A Question of Loyalty” begins on the morning of December 7, 1941 and takes you through 100th fighting in Italy in 1943 to the eve of the Battle of Cassino.  Now working on “Proof of Loyalty” following the 100/442/MIS to the war’s end.

Born in Wisconsin in 1943, raised in Florida, I paid my way thought the University of Florida by selling books door-to-door. I finished my business career 41 years later as president of a Walt Disney licensee … marketing English language learning materials in Japan, Taiwan, Hong Kong, and Korea. During my tenure as president, World Family grew to become Disney’s second largest licensee in Asia … second only to Tokyo Disneyland. McGraw Hill published my legacy business book “Making Millions in Direct Sales” in 2005.

A lover and reader of history, I have been fortunate to visit 203 countries and territories starting with the Peace Corps in Africa in 1966.

As a consequence of our passion for travel, Tomoko and I have ridden canoes in tribal Laos, “African Queen” river tugs down the Mekong, and cruise ships meandering along the Danube, the Nile, the Amazon, and the Yangtze.  We have climbed the mountains in Kinto Balu and the Japan Alps.  Our live-on train experiences include South Africa, China, Tibet, India, and the “Stan” Republics in Central Asia.  We bungee jumped over the bridges of Taiwan, white water rafted on the Zambezi, and hot air ballooned over the game reserves of South Africa and Spanish ranches.

Much of our recent travel has centered on book research. We drove to Camp Shelby, Mississippi where the 442nd trained for a year. In near-by Hattiesburg, we interviewed the Mississippi woman who married a Japanese American in 1942. We have visited Manzanar and  the Japanese-American museums in Los Angeles and San Francisco to try to get a feeling for life in the concentration camps. We have trekked the battlefields in Italy and France where the Nisei fought and died to take their place in the American pantheon of heroes.

No moment doing research was more rewarding than our lunch with Sue Isonaga, the 1939 au pair to FBI agent Robert Shivers. Sue’s quiet Americanism created grave doubts about Shivers’ assigned role to prepare the Japanese for internment in Hawaii.  Sue has since passed away.  I trust Picture Bride and A Question of Loyalty will help memorialize her contribution in preventing most Japanese in Hawaii from living in camps during WWII.

For more information on Mike and his books, visit his website at: https://mikemalaghan.com/