Things I Do For Money

by Warren Sonoda at SF IndieFest

In his 11th feature film, BAFTA-winning and Emmy-nominated filmmaker Warren P. Sonoda (Trailer Park Boys, Coopers Camera, 5ive Girls) brings his most personal and daring film to date, Things I Do For Money. His desire to reconnect with his Japanese-Canadian roots, coupled with an idea to explore genre-mash ups, creates a crime/caper/classical-cello movie with a cultural twist. At the centre of this maelstrom are newcomers Theodor and Maximilian Aoki, who not only star in the film, but also compose and perform the entire original score together on their cellos – two things they’ve never done before.

THINGS I DO FOR MONEY is about Eli and Nick Yaguchi, two Japanese-Canadian cello-playing brothers from Hamilton, Ontario (played by real-life brothers Theodor and Maximilian) who inadvertently steal a bag of money – and all the woes that go along with it – from a lethal Vancouver hit man. Through a confluence of events and massive bad luck, they also have to save their father’s life, steal an $8 million dollar painting and fight for their lives to get into a prestigious music conservatory. Along the way they discover that everyone has a price and that family never bails on family, no matter the cost.
View TRAILER
### 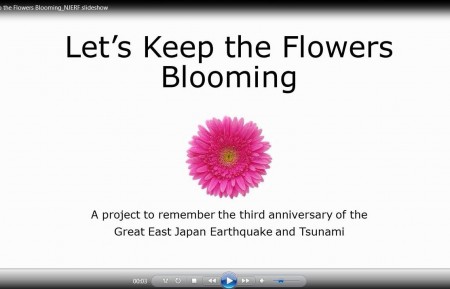 On March 11, 2014, we gathered to the remember the third anniversary of the Great East Japan Earthquake and Tsunami and shared this video. Guest were asked to write a note of hope and friendship to the thousands in Northern Japan who are still working to rebuild their lives and communities. Click on the image to see the video that was shared at the event.