Explore all of the upcoming programs and events at the Center.

Sign up for our online cooking webinar with chef Kenji Yokoo and learn how to make oyakodon, a classic Japanese comfort food dish made with eggs and chicken. 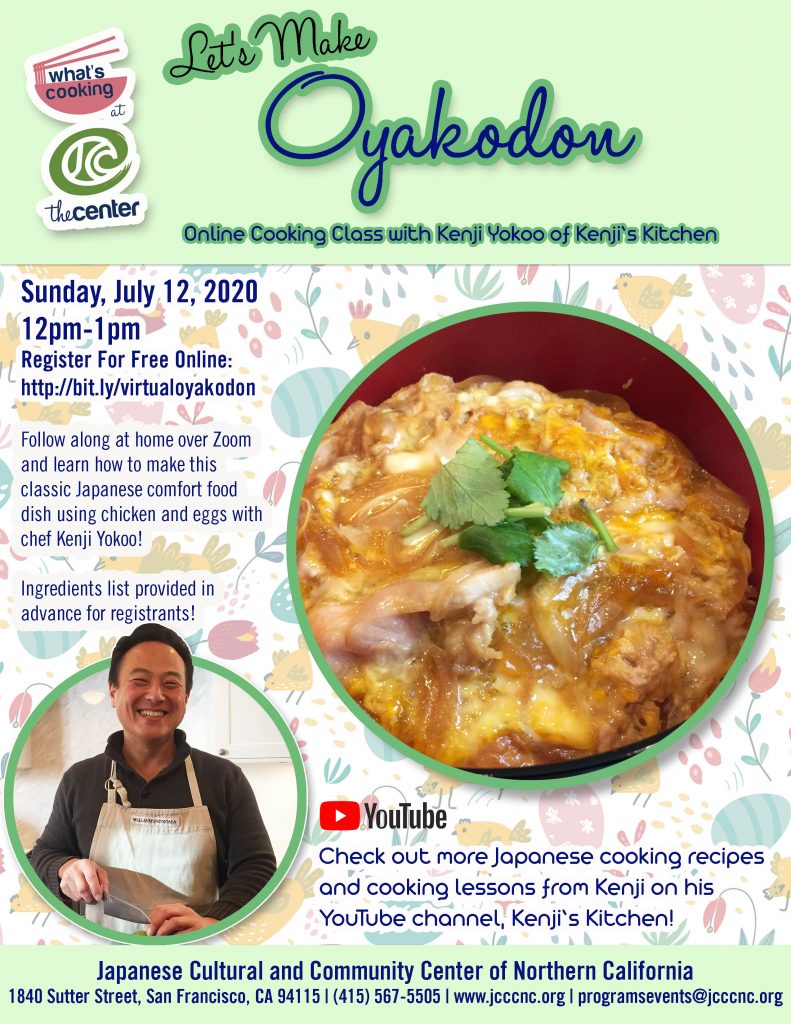 Even though we’re all stuck at home during shelter in place, we’re still offering online cooking classes with our cooking instructor, Kenji Yokoo! In this virtual cooking class, Kenji will teach you how to make oyako donburi (oyakodon for short), which is a hearty, rice bowl dish topped with a savory chicken and egg mixture. In our cooking webinar, you’ll be joining Kenji over Zoom, and you can either watch and enjoy, or follow along in your own kitchen with Kenji’s instructions and make your own oyakodon during the webinar!

The traditional oyako donburi we will be making includes chicken, however if you are a vegetarian Kenji suggests substituting tofu for chicken and to use a konbu or shiitake dashi.

Participants will need the following equipment:

Ingredients (this will make one bowl):

Kenji was born and raised in southern rural Japan and has been passionate about cooking from a very young age. As is common in Japan, he grew up in a home with three generations and spent every minute that he could with his grandmother in the kitchen, who taught him everything he knows about cooking. Kenji learned from her not just cooking techniques and the importance of using seasonal ingredients, but that also that the purpose of cooking is to bring joy to the people that you are cooking for. He has been teaching home cooking part time for over 20 years and recently decided to start his own business following his passion. Kenji hosts two Airbnb Japanese cooking classes with over 195 reviews, all five stars. In December 2019, Kenji was awarded the Bay Area “Quality Champion” award by Airbnb for receiving the highest quality scores on his cooking classes. Kenji has also taught team building with Japanese cooking for many Bay Area companies including Adobe, Airbnb and Facebook. With the current situation, Kenji is not teaching his classes in person and has started YouTube channel “Kenji’s Kitchen” so that people can continue to learn how to cook Japanese meals at home. Click here to view the Kenji’s Kitchen YouTube Channel! 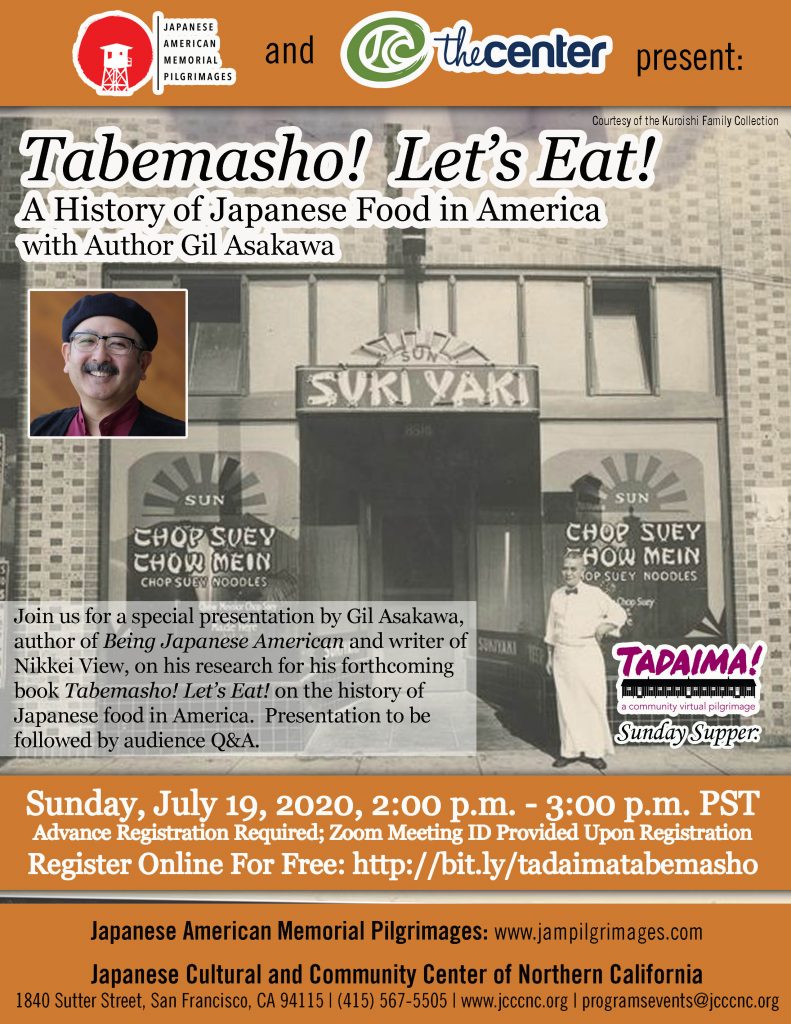 Courtesy of the National Archives and Records Administration

The journey of Japanese food in America has been the story of an immigrant cuisine that adapted to a new land, much like how Japanese people came to the US and had to adapt. It was originally food for families, and newcomers. Like the community, the cuisine was put on hold during the wartime incarceration. In the postwar years, Japanese food was slowly accepted because American troops were introduced to some dishes, but the familiarity was limited to just a couple of main dishes: Sukiyaki and Tempura. Sushi was “gross” and “weird” well into the 1980s. Today, though Japanese food is so common that you can buy sushi — not necessarily good sushi, but still… — at supermarkets across the US. Join Gil Asakawa, who’s writing a history of Japanese food in America, “Tabemasho! Let’s Eat!” for a tasty discussion.

Register for this webinar to be able to participate in the Q&A following the author’s presentation. Advance registration is required, as space is limited.

Gil Asakawa is a journalist, editor, author and blogger who covers Japan, Japanese American and Asian American and Pacific Islander (AAPI) culture and social justice issues in blogs, articles and social media. He is a nationally-known speaker, panelist and expert on Japanese American history and Asian American identity. He’s the author of “Being Japanese American” (Stone Bridge Press), a history of Japanese in America originally published in 2004 and revised in 2014, and co-author of “The Toy Book” (Alfred Knopf, 1991), a history of the toys of the Baby Boom generation. He is currently working on “Tabemasho! Let’s Eat!” (Stone Bridge Press), a history of Japanese food in America which will be published in 2021.

His journalism experience runs the gamut from being the music editor for Denver’s alternative weekly newspaper Westword and entertainment editor for the Colorado Springs Gazette daily newspaper to managing the DenverPost.com website. His Asian American experience includes a blog, at www.Nikkeiview.com, and posts on social media outlets including Facebook, Twitter and Instagram. He is well-known to his followers for posting photographs of food on social media. He has written for national publications including Rolling Stone magazine, and he has been published in Newsweek Japan. From 2010 to 2020, Asakawa was a student newspaper adviser in the journalism department of the University of Colorado Boulder. He was also a consultant for AARP’s Asian American marketing team, managing its social media and writing articles about Asian Americans and Pacific Islanders (AAPIs).

For his extensive pioneering online work, he received the “Voice Award” from the Asian American Journalists Association (AAJA).

He is the former president of the Mile High chapter of JACL, the country’s oldest AAPI civil rights organization, and he is a longtime columnist for JACL’s national newspaper, The Pacific Citizen. He has also contributed to the Japanese Canadian national newspaper, Nikkei Voice, and to the Japanese American National Museum’s Discover Nikkei website, as well as giving a day-long symposium at JANM on the history of Japanese community newspapers in America.
Asakawa was appointed in 2014 by Mayor Michael B. Hancock to Denver’s Asian American Pacific Islander Commission. He is also a member of the US-Japan Council, Japan America Society of Colorado, Nikkeijin Kai of Colorado, Asian American Journalists Association, and is an executive board member for the Emily Griffith Foundation.

He was born in Tokyo to a nisei, or second-generation father who was born in Hawaii, and a mother who is from Nemuro, in Hokkaido. The family moved to the U.S. when he was 8 years old.

The Center is a proud community partner of this year’s Tadaima! Virtual Community Pilgrimage.

The founders of the Japanese American Memorial Pilgrimages (JAMP), Kimiko Marr and Marissa Fujimoto met at the Minidoka 2016 Pilgrimage. There they were roommates and Kimiko shared her brain child with Marissa, which is now called the Japanese American Memorial Pilgrimages. Both having their family incarcerated and filmmakers, they decided to partner up to document stories from the pilgrimages they attend to share the experience of those who were incarcerated and the intergenerational stories that come along with the incarceration.

From 2016-2018 they have traveled to 12 Pilgrimages and 16 assembly centers. They received a grant in 2018 from the Japanese American Confinement Sites program grant through the National Parks Service to produce a website to host these stories as well as to attend all pilgrimages of the WWII incarceration camp sites and to produce mini documentaries from the pilgrimages of families and their experience.

In the midst of the ongoing COVID-19 pandemic, each of the annual pilgrimages to sites of wartime Japanese American incarceration have been canceled. These pilgrimages provide important educational and community-building opportunities for descendants of the camps, the Japanese American community as a whole, and the wider public. Recognizing the ongoing significance of these pilgrimages, JAMP quickly assembled their network of community members to coordinate “Tadaima! A Community Virtual Pilgrimage,” to take place from June 13th – August 16th, hosted on the Japanese American Memorial Pilgrimages (JAMP) website. The 9-week virtual community pilgrimage features free daily virtual programs centered on the Japanese American wartime experience, with separate themes for each day of the week as well as a separate thematic focus for each week, exploring the community’s narrative through speaker panels, discussions, musical and artistic performances, a curated online film festival, and more!

For more information on JAMP and to register for other Tadaima! Virtual Community Pilgrimage programs, go to: http://www.jampilgrimages.com.