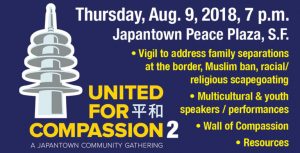 Visit the Facebook Event Page
“United For Compassion 2” is a Japantown community gathering to address family separations at the border and the Muslim ban, racial / religious scapegoating, among other issues.
Featuring: Multicultural & youth speakers / performances, a Wall of Compassion, Resources
Partial list of speakers include:
– California state Assemblymember Phil Ting

Presented by the UNITED FOR COMPASSION CONSORTIUM

The United For Compassion Consortium and the San Francisco Japantown community stands in solidarity with those now being targeted nationwide by the rhetoric of hatred and racial and religious scapegoating.
Since before the 2016 elections, there had been a rise in incidences of hate throughout the country, which appear to be emboldened by the misogynistic, xenophobic and racist rhetoric of the Trump campaign. By the time the Japantown community held the first United For Compassion vigil against post-election hate two weeks after the elections on Nov. 22, 2016, the Southern Poverty Law Center had documented more than 700 incidents since the elections alone, including physical assaults and racist vandalism.
Since that time, an anti-Muslim travel ban has been upheld by the Supreme Court using the same flawed logic which legalized the incarceration of Japanese Americans in 1944. Our worst fears have also been realized with the recent Executive Order which authorized the indefinite imprisonment of migrant families in detention centers across the country.
One site being considered as a potential detention facility for unaccompanied minors is adjacent to the former Rohwer concentration camp in southeast Arkansas, where the United States government incarcerated 8,000 Japanese Americans between 1942 and 1945.
According to a CNN report, some 430 parents from separated families were likely deported without their kids. Once they are located, the logistics of coordinating reunions could take months. There are currently 711 immigrant children from separated families who remain in custody.
As a community that knows all too well the effects of wartime hysteria, racial prejudice and the failure of political leadership, the Japanese American community responds, using our own experience as a stark reminder of the effects of the deprivation of civil liberties.
Seventy-seven years ago the FBI began arresting our Buddhist priests, Japanese Language School teachers and community leaders. Within two months the U.S. government began the mass incarceration of all Japanese Americans from the West Coast. This human tragedy and violation of constitutional rights is not what a Trump advisor stated as a “precedent” for a present-day “Muslim registry.” It was a grave injustice and grave mistake, for which the nation apologized.
As a community, Japanese Americans cannot be silent while groups are targeted and demonized in the same way that we once were. Now more than ever, our community must speak out for targeted communities.
In a show of unity, the Japanese American and Japantown community is taking a clear and unequivocal stand against hate, while addressing the fear that has shrouded our communities. We stand in solidarity for equality, equity, and freedom. We stand for the human spirit. We stand here United for Compassion.